It’s a dark autumn night, we’re sat in a borrowed meeting room and Caroline has laid an iPad on the table. The screen is pitch-black save from a very, very light blue spot just off of the centre.

Caroline then reads us a passage from Carl Sagan’s book ‘Pale Blue Dot’. It begins, “Look again at that dot. That’s here. That’s home. That’s us. On it everyone you love, everyone you know, everyone you ever heard of, every human being who ever was, lived out their lives.” The next part is a pretty succinct summary of human history, ambition, cruelty and generosity.

It ends on a reminder, “There is nowhere else, at least in the near future, to which our species could migrate. Visit, yes. Settle, not yet. Like it or not, for the moment the Earth is where we make our stand.”

And we keep looking at that tiny speck of blue, trying to make sense of it all; it’s kind of scary, it’s kind of hopeful, in a way it’s majestic.

A few days later I’m drinking wine with my house-mate in our cold flat. I’m telling her about what happened in that meeting room. I’m trying to explain the gravity of this dot and of Carl Sagan’s words. Becky asks me if I’ve ever read a speech his wife wrote after his death. I haven’t. So I open up Google on my phone, Becky can’t remember his wife’s name maybe something like Ann?

I type into the search box and there it is courtesy of Goodreads. I read it and it’s beautiful. The line that sticks with me over the next few days;

“But I saw him. We saw each other. We found each other in the cosmos, and that was wonderful.”

And I keep thinking a lot about Carl and Ann. How they both speak about the impossible and the unknown with total calm and eloquence. There doesn’t seem to be any fear in them.
I wonder how they met, so I turn again to my good friend Google. This is what we discover;

Towards the end of the summer of ’77, NASA launched two spacecraft as part of the Voyager Interstellar Mission. On board each craft was a golden record that included, among other things, the sound of a kiss, music from all over the world including ‘Johnny B. Goode’ and greetings in 55 different languages. The records on board were meant to survive for a billion years, in the hope that someday, against enormous odds, they might cross paths with an alien civilization.

How do you track-list the ultimate mix tape of the human experience? What do you do if you have one shot at describing humanity to an unknown life form? That was the charge of Carl Sagan —of course, Sagan had a lot of help, including Ann Druyan.

It was during the Voyager project that Ann and Carl fell in love.

Ann called Sagan and left a message at his hotel. At that point, Druyan and Sagan had been professional acquaintances and friends, but nothing more. But an hour later, when Sagan called back, something happened. By the end of that call, Ann and Carl were engaged to be married. They’d never kissed. Never been on a date but they had decided logically and completely that they were hopelessly and endlessly in love.

Oh, and Carl was married to his second wife at the time and Ann was engaged to another man.
Oh, and they were also part of the team working alongside Carl and Ann to create the Golden Record.

Oh, and the Voyager spacecraft that is carrying one of golden records took a photograph of humanity in its entirety whilst also carrying a disc that attempts to communicate everything that it is to be human. Voyager 1 took the photograph of the Pale Blue Dot which blew our minds back in that meeting room. 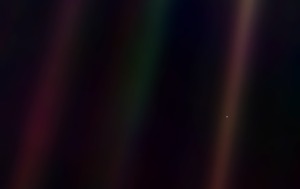 So the story of that photograph – and the story of our show – well it’s a complicated love story and it all starts with an interstellar space mission and a golden record.

‘You, Me & Everything Else’ will be at ZOO, 140 Pleasance, Edinburgh, EH8 9RR
You can book tickets here.